Ask the Archivist:‘Top’ of the Morning to You

This weeks topic comes once again from commenter John W Kennedy. A gold star for him… if only I could find my gold stars hidden somewhere behind the boxes of KATZENJAMMER KIDS originals.

“How about a discussion of toppers? I can recall a few in the 50s (“Cicero’s Cat” and “Spooky”), but was born too late for their heyday.”

Mr. Kennedy has asked about the old Sunday top strips, though his two examples were not King Features titles. The Hearst strips started the ball rolling in 1926, replacing a long picture running the length of the page (most strips were offered in full page format), usually editorializing on the story below. The new extra strips would accompany a longstanding one, always by the same cartoonist. 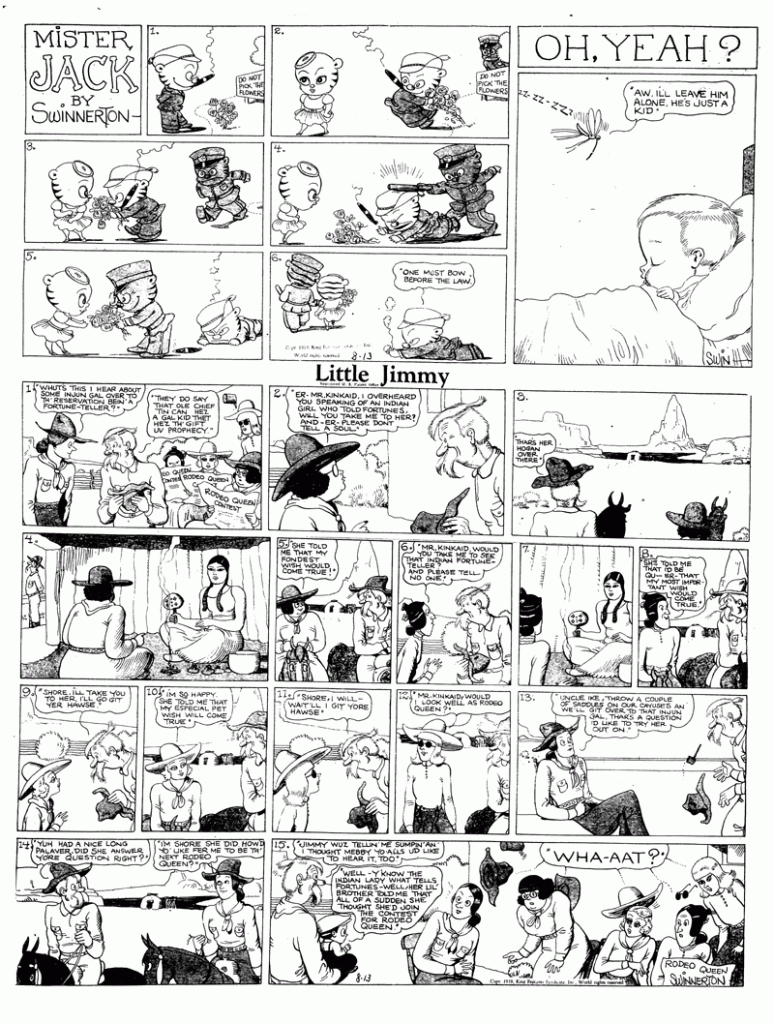 At first there were some short-lived titles like “Jungle Bed-Time Stories” by Harold Knerr before “Dinglehoffer und his Dog”, and “No Brains, but-” by George McManus, before “Rosie’s Beau” took the spot.

The strategy was simple, and it paid off; The Hearst section now could boast twice as many strips in the same number of pages, and editors would tend to keep the page intact rather than go for other syndicate’s material.  Other companies would add second strips eventually too, like Chicago Tribune and Ledger Syndicate opted for a small one tier extra at the bottom of their strips, in late 1931.

The top strip for Ad Carter’s “Just Kids” was the strange
“Nicodemous O’Malley and his Whale Palsy-Walsy.” (1937)

Most of the Hearst cartoonists had been around for many years, and had strips that had come and gone, but the new Sunday arrangement brought them back to life, such as Segar’s “Sappo” was the star of an early 20′s daily, “The Five-Fifteen”,  Fred Opper revived “And Her Name Was Maud”, the cantankerous mule to adorn the last years of “Happy Hooligan”, and James Swinnerton chose his Mr. Jack to make a comeback with “Little Jimmy”.

“It’s Papa Who Pays” was the top to Jimmy Murphy’s “Toots and Casper” for many years. Cut-outs and puzzles also occupied a corner in the top comics, too.

Many top strips changed after a while. Chic Young’s “Family Foursome” ran out of golf gags, so “Colonel Potterby and the Duchess” took over. “Felix The Cat” had several toppers, as well as several artists. They included “Laura”, “Bobby Dazzler”, “Gus The Ghost” and “Don Poco”.

Birds and cats rarely get along, but Otto Mesmer’s “Laura the Parrott”
was once teamed with Felix the Cat.

The long term favorites include Alex Raymond’s Jungle Jim, Bunky of “Parlor Bedroom and Bath” by Billy DeBeck, and “The Van Swaggers” by Russ Westover.

In the 1940′s, the day of a full page to accommodate one or two strips was coming to an end. Often it’s said that this was due to wartime paper shortages, but strip shrinkage was actually to make room for more advertising in the comic section.  Only a very few strips remained popular in full page format, like PRINCE VALIANT or BRINGING UP FATHER, often used as the cover of sections even outside the Hearst chain.  The use of smaller strips meant if the old top comics never proved popular enough to survive on their own, they were cancelled.

A late top strip was George McManus’ “Snookums,”(1944-1956) which replaced “Rosie’s Beau.” Rosie was a redoing of a WWI era strip, but though “Snookums” was an even earlier series, this version had an updated cast. Also, whereas the original stayed a baby, this one featured a little boy.

After nearly 30 years,  “Colonel Potterby and the Duchess”, the last of the KFS strips that started out as toppers, ended in November 1963.

Keep the requests coming! You can post questions in the comments below or in the forums here. And don’t forget I have my own archives. If you’re new here, you can always look back at prior discussions and comment there as well.